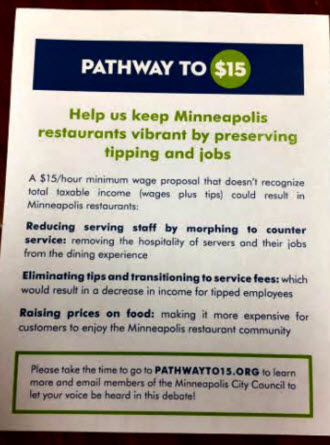 New Twist on the Fight for $15 Wage Issue

New Twist on the Fight for $15 Wage Issue

Wages may be going up in Minneapolis.

Here is an interesting twist in the fight for $15 developing in Minneapolis.  Based on the website link, it looks as if the issue has developed beyond a worker center approach to a liberal/progressive cause which includes interested citizens, restaurant owners and employees. More on the effort underway in Minneapolis from this story in City Pages:

Though the Lowbrow has been in business for six and a half years, and things are going very well for the Nicollet Avenue “burgers, beer, and brunch” restaurant, owner Heather Bray says she is “terrified.”

“If this minimum wage happens without a tip credit, I’m afraid it will be the beginning of the end,” she says emphatically.

At issue is the city of Minneapolis’ plan for phasing in a $15 minimum wage for all workers. Some restaurant owners and servers are campaigning for a tip credit, whereby tips would count toward the $15 hourly wage. Otherwise, they say, owners will phase out tipping altogether and raise menu prices to come up with the money to cover the new minimum wage.

So a coalition of restaurateurs and servers has hired a professional lobbyist to help create a campaign called “Pathway to $15.” The coalition argues that restaurants and bars compensate their employees in a unique way, and that way should be considered as the city forges ahead with the wage increase. So far, Mayor Betsy Hodges and the Minneapolis City Council have indicated that a tip credit will probably not be considered. Hodges has even said that a tip credit is detrimental to women, who make up a majority of service industry staff in restaurants nationwide.

Here are the goals of the group taken from the Pathway to $15 website:

Our coalition supports a pathway to a $15/hour minimum wage in Minneapolis.

We share the belief that employees should be properly compensated for their hard work in this changing economy to support their families. As members of the Minneapolis community, we want the city’s businesses – and the employees who depend on them – to thrive. An increase in the minimum wage will empower all segments of the population in Minneapolis – especially women and people of color.

Most restaurants and bars compensate their employees in a unique way.

Restaurant work is a service-driven profession. The tips restaurant workers receive are both a wage and reward. While management is able to track tips (which mostly happen now via credit card) for tax purposes, tips go directly to the restaurant employee without management interference. Restaurant workers benefit from both an hourly wage and tips. In full service restaurants, servers, bartenders, and delivery drivers are often the highest paid employees based on the combination of tips and wages. Because of this pay structure, many restaurant employees are already making $15 an hour or more.

Recognizing total taxable income will protect the jobs and income of restaurant employees.

Raising the standard to $15 without recognizing employees’ total taxable income would have the unintended consequence of making it harder and more costly for bars and restaurants to hire more employees. Many restaurant and bar staff are those most in need of access to good, local jobs. Forcing neighborhood restaurants and bars to raise the minimum wage without recognizing tips will end up hurting those it is intended to help, either through reduced working hours or because of layoffs.

According to CUE resources in Minnesota, the business community is following this initiative closely.  Tipped employees in better restaurants are joining the opposition to the proposed wage.  It is possible that there may be state preemption of these kinds of local wage ordinances passed in Minnesota. all this, possibly, depending on the outcome of a very crazy legislative session ending Monday night.

In many ways, this feels reminiscent of the Seattle fight for $15 movement, and is definitely a local issue worth keeping an eye on.