Six dozen House Democrats today asked Speaker Nancy Pelosi to hold a vote on a far-reaching labor bill that passed out of committee in September.

The “Protecting the Right to Organize Act,” H.R. 2474 (116), would make it easier for workers to unionize. Although the bill has little chance of passing the Republican-controlled Senate, House Democrats in union-heavy districts are eager to pass it in case Democrats take back the upper chamber and the White House in November.

Seventy-two House Democrats told Pelosi in a letter Thursday that the bill “should be brought to the House floor swiftly.”

“It has 219 sponsors and cosponsors, including several Republicans, indicating that it would pass the House with bipartisan support,” the members wrote. “We can and should pass it now.”

The legislation would allow employees to form unions under certain circumstances by “card check” (that is, through the informal collection of authorization forms from a majority within the bargaining unit) and would grant the NLRB the power to levy punitive fines on employers that violate labor law; right now the NLRB can collect only back pay.

Business opponents of the bill are trying to peel off vulnerable Democrats and to stop more Republicans from signing on. The Coalition for a Democratic Workplace, a conservative business group that opposes pro-union legislation, says it has polling data that shows Rep. Joe Cunningham (D-S.C.) will lose support in his district if he votes yes.

“Though currently popular with his voters, Joe Cunningham can alienate voters by supporting an unpopular labor bill,” said a polling memo prepared by GS Strategy Group. Cunningham’s office did not respond to requests for comment on whether he plans to vote for the bill.

O’Rourke’s proposal includes a grab bag of union protections currently under consideration by House Democrats. It would permit the National Labor Relations Board — the quasi-judicial agency charged with protecting workers’ union rights — to impose monetary fines on employers that terminate a worker wrongfully or that, in violating the National Labor Relations Act, cause a worker to suffer economic harm. Under current law, the NLRB may order reinstatement or collection of back pay, but it can’t impose fines.

The proposal, in supporting the Protecting the Right to Organize Act, H.R. 2474, would allow the NLRB to hold corporate directors and officers individually liable for any violations of which they had prior knowledge. O’Rourke’s plan would also make it easier for independent contractors to establish in court that they are misclassified as employees.

Further, O’Rourke’s plan seeks to create a European-style system of collective bargaining, where union leaders and managers would agree on minimum standards for an entire industry sector rather than negotiating separately with each individual company. For industries with little union presence, O’Rourke says he would establish so-called wage boards, with equal employer and employee representation, to bargain over industry-wide pay.

O’Rourke says he would preserve the Obama-era standard on joint employment, which made it easier for businesses — particularly large chains — to be held liable for labor violations committed by their franchisees and contractors. The Trump administration is in the process of writing a more business-friendly rule; O’Rourke says he would nominate NLRB members who would either protect the Obama-era standard or adopt a stronger one.

O’Rourke calls for a $15 minimum wage, including the elimination of lower wages for tipped workers and people with disabilities. He would also reinstate the Obama-era overtime rule, which raised to $47,476 the salary threshold under which virtually all workers are guaranteed time-and-a-half pay if they work more than 40 hours in a given week. The Trump administration is poised to issue a regulation setting the threshold below the Obama level, to $35,308.

In addition, O’Rourke would seek to adopt a stricter legal test making it harder for companies to classify workers as independent contractors. The change, already the subject of fierce debate in California, would give thousands of gig-economy workers the same legal protections as full-time employees, including the minimum wage and overtime.

O’Rourke also says he would sign a Democratic bill, H.R. 7 (116), to narrow the gender wage gap by preventing employers from basing pay on salary history and require employers to demonstrate that any pay disparity between a man and a woman was attributable to job performance rather than gender. In addition, he supports legislation to prevent LGBT discrimination in the workplace, H.R. 5 (116) , and giving the Equal Employment Opportunity Commission more authority and funding to go after bad actors.

O’Rourke says he would also ban agreements that require workers to waive their right to sue their employer, a prohibition that has grown in popularity in the wake of the #MeToo movement.

To boost vocational training, O’Rourke says he would make community college free and invest $90 billion over 10 years to create more registered apprenticeships that meet national standards for quality. In addition, he says he would triple the amount of funding for adult training programs to $2.4 billion a year.

O’Rourke does not specify how he would pay for these proposals.

The vast majority of O’Rourke’s proposals would require approval from Congress, meaning that Democrats would have to win control of the House and Senate for them to become a reality. Many of the policies are based on existing legislation.

What do other candidates support?

O’Rourke’s plan aligns with what other Democratic presidential candidates have already proposed. The most significant changes also have widespread support among House Democrats. 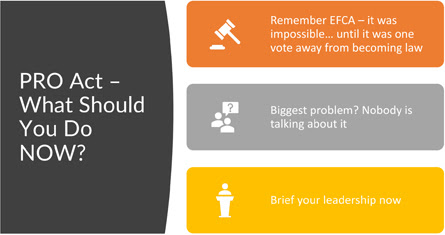 Beware the PRO Act (or at least be aware)

Do you remember EFCA? Back in 2008, employers were freaking out over the Employee Free Choice Act which would have radically altered labor law in favor of unions. EFCA failed to pass in an evenly split Senate that year to the immense relief of the American business community.

Are you aware that right now there is a bill sitting in the House of Representatives that is essentially EFCA on steroids? If you didn’t know, don’t feel bad. With immigration and tariffs leading the news cycle, the Protecting the Right to Organize (PRO) Act has been flying under the radar since it was introduced in the House by Rep. Bobby Scott (D-VA.) and in the Senate by Sen. Patty Murray (D-WA) last May.

Protecting the Right to Organize Act (“PRO Act”) is designed to strengthen protections for employees engaged in collective action, to expand coverage of the NLRA to more employees, to facilitate a process by which workers and employers can reach a first collective bargaining agreement, to provide for stronger remedies for employees whose rights under the NLRA have been violated, to provide for penalties against employers who violate those rights, to safeguard the right to strike, to repeal prohibitions on collective action, to permit fair share fee arrangements, to improve the purchasing power of wage earners in industry, and to guarantee more effective enforcement of the NLRA.  You can review a complete section by section description of the PRO Act here.

Here are some examples of how labor law provisions would be impacted under the PRO Act:

The PRO Act would completely rewrite labor law in the United States.  It’s not going anywhere in 2019, but if the Democrats can flip the Senate and the White House in the 2020 election, the PRO Act could become law within weeks during 2021.  THat’s why it’s important for you to familiarize yourself with the PRO Act now and start talking to your management team about it. Talk about it at your local SHRM chapter meetings, or in local business group meetings.  Here is a great resource for more information and facts on the PRO Act.