Smokin’ Hot Headlines For Your Leadership!

Positive Employee Relations: Read All ABout It

Are you taking full advantage of your CUE membership?  It’s possible that you are not.

Every  Friday, we publish an e-mail newsletter for our members that covers many of the major labor relations news that broke during the week, along with some terrific leadership and best practice tips from a variety of expert resources.

It might not be the Sunday New York Times, but it’s a pretty hefty read in a quick format that can help keep you and your team aware of what’s going on in our field.  You can see some examples of the stories we try to share after you listen to a rock classic from Joe Jackson, Live – or on YouTube anyway…

Headlines From Around The CUE e-Mail Box

A lawyer for a labor union urged the Connecticut Supreme Court on Thursday to rule that the firing of a state worker caught smoking marijuana in a state-owned vehicle while on the job was too harsh a punishment.

Gregory Linhoff was fired from his maintenance job at the University of Connecticut Health Center in Farmington in 2012 after a police officer caught him smoking pot. He had no previous disciplinary problems since being hired in 1998 and had received favorable job evaluations, according to his union. He was arrested, but the charges were later dismissed.

What Business Can Learn from Protestors

Protests do more than draw attention to causes. They can also spur innovation.

Plenty, says Stanford Graduate School of Business professor of organizational behavior Sarah A. Soule, whose recent research analyzes where and how new protest tactics emerge. Soule and Dan J. Wang of Columbia Business School say their findings can apply to businesses seeking to foster creativity. Their paper is expected to be published in a forthcoming issue of American Sociological Review.

Soule and Wang analyzed a database of news stories about 23,000 protests as reported in the New York Times between 1960 and 1995. They found that those gatherings that convened multiple organizations representing different interests but pursuing the same goal were likely to innovate by combining protest tactics in new ways. For example, Yale University students in 1977 joined school food-service staff to seek unionization rights for the workers. The effort involved a hunger strike and blockades of food deliveries, a highly unusual combination of a peaceful, symbolic tactic with a highly disruptive one.

Becoming a boss isn’t a career goal for many, but if it is for you, here are the traits you’ll need.

Some people are born leaders, but that doesn’t mean they want to step into management roles at work. Just one-third of employees believe becoming a manager will advance their career, according to a survey by staffing consultants Addison Group. And while millennials have a slightly more positive view of professional leadership roles, just one in five say they would consider leaving a company that didn’t provide an opportunity to be a manager.

We also publish quarterly journals, monthly legal alerts and many other resources available free to members via our CUE  member portal. 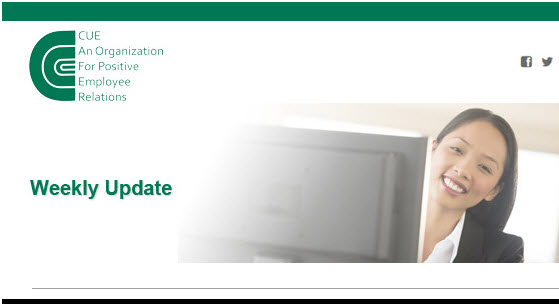 The CUE conference in Denver is now past and the feedback from attendees has been amazing.  More than 300 attendees met earlier this week learning about all the latest developments in labor and employee relations, and headed home with solid ideas for building a positive workplace environment.  While the CUE staff travels home and spends a little time with our families, here are some links to end the week.

Thanks to all our speakers, attendees and volunteer leaders who truly helped us in Reaching the Summit of Positive Employee Relations! Attendees who would like to take advantage of the offer from CUE keynote speaker Kris Dunn to get your own 9 box grid leadership profile done can send your request to him here.

And finally,  this story from Politico could create travel frustration for some this weekend.

Some Uber drivers are pushing for a strike this weekend. According to a Facebook events page, strike organizers are calling on Uber to raise rates by 60 percent nationwide, add tip options, raise the cancellation fee to $7, and raise the minimum fare to $7. The strike will test whether or not Uber drivers can successfully organize meaningful collective action, even though the company insists they are not employees.